The mission of the Border Health Collaborative is to provide community organizing, health promotion planning and advocacy for border health studies, organizations and professionals to develop the San Diego-Tijuana border health organizational system.

The Border Health Collaborative proposes to implement a multi-disciplinary health promotion-based advocacy program to reform the San Diego-Tijuana border health organizational system. The border health organizational system is in need of institutional reform to correct the endemic disenfranchisement of community-based and grassroots organizations; the disparate, uncoordinated and redundant missions and interventions; and the under-allocation of funding streams for program development, service delivery and professional training.

The mission of the Drug-Free Border Coalition is to reduce substance abuse among youth in the San Diego-Tijuana region by linking and supporting groups and individuals engaged in prevention on both sides of the border. 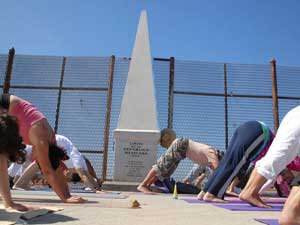 The South Region Tobacco Control Initiative focuses on public health policy advocacy campaigns that reduce future disease and death from tobacco use in San Diego County. Campaigns have included work on the campus of the University of San Diego, which adopted a campus-wide policy that restricts smoking. The Initiative has also worked and restrict tobacco sponsorships and increase smoke-free outdoor environments including four major public health policies in the municipalities of National City, Imperial Beach, Bonita and the Port of San Diego. Implementation and enforcement of the smoke-free ordinances has been successful and seamless for every community and entity with the ordinances having been supported by residents, community partners, local officials, city staff and law enforcement.

Currently the Initiative is working on smoke-free multi-unit housing in apartments complexes and condominiums in the South Bay region including the communities of Coronado, Chula Vista, Bonita, Imperial Beach and San Ysidro. Additionally, the Initiative operates a campaign to counter the tobacco industry's influence on the entertainment industry in San Diego County.